Are you American or European? Congratulations, you won the big lottery: you are a billionaire! Do not look in your wallet; your fortune is completely different. Gold, platinum, Diamond? No, it’s a thing that you see every day and probably do not know the scarcity: the WATER.

Is it hard to believe? Imagine that you fill a bottle (1.5 liters or 33.8 oz) with all the water of the Earth (seas, oceans, lakes, rivers, etc.). Now you pour some of this water into a shot glass — so that you get all the fresh water in the world because everything else in the bottle is salty.

Then take a tablespoon of water from this tiny glass: this is about the quantity of freshwater available for humanity because the water remaining in the glass is frozen.

Admittedly, this tablespoon represents enough water for the entire world population. Unfortunately, this wealth is not accessible to everyone and, above all, it is polluted: even today, 3 people die every 2 minutes dues to the consumption of unsanitary water.

Meanwhile, in the West, we live as billionaires and burn up to 4,000 liters of water (1,057 gallons) per day per person…. so we literally pour money down the drain… with our pee!

In fact, we drink only 2.5 liters of water a day (around 0.5 gallons) and we use about 150 liters (40 gallons) in the shower, toilet, kitchen, dishwashing, and household. The rest of the water is much more insidious: about 3,000 liters (793 gallons) go into food production to grow vegetables, water animals, etc. And about 1,000 liters (264 gallons) are required to manufacture our daily objects (e.g. growing cotton clothes, extracting oil to make plastic and packaging, etc.).

The water consumption by living beings is a natural phenomenon. However, the water pollution is much less expected. It is caused by our household waste (grey water) and especially by the manufacturing of material goods (clothing, telephones, computers, cars, houses, etc.).

The environmental impact of industrial manufacturing is so detrimental that we now talk about “black water”… Yes, that’s the dark truth!

And much of this grey and black water is grossly rejected in the world’s tablespoon!

It is time for the treasure hunt and this is your first clue: as the tap is kept running, somewhere water is taken, so something shall be awakened. 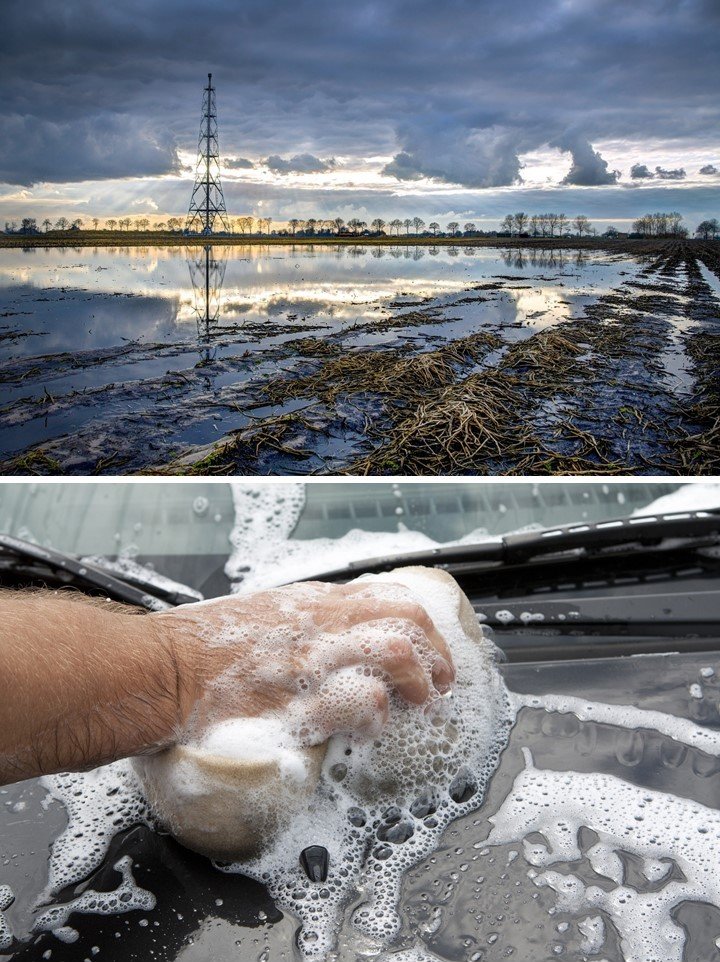 For instance, let’s consider America first. There the water consumption rises up to 7,500 liters per day per person (around 2,000 gallons). The problem is doubled. On one hand, drought periods are frequent in many states (e.g. Nevada, California) and access to drinking water is a headache and causes huge expenses and restrictions for the inhabitants.

On the other hand, water pollution is a public health problem: bacteria, chemicals, and radioactive products were found in some Americans’ faucets. However, the sanctions are unusual and efforts for a better treatment and control of the water quality are below expectations. So shutting down your tap to save drinking water is really acting to… make America great again!

Like many countries, the United States export and import water in the form of food and objects (called “virtual water”). The USA is even the largest exporter and importer in the world and, therefore, the most dependent on virtual water flows and diminishing resources. The bill is pending… and we are not sure that they will continue to take this problem with a pinch of salt for so long!

In the meantime Europe swallows the same spoon of cod liver oil: the merciless consumption pollutes water and makes the Europeans dependent on resources. At the same time, water is more scarce because of frequent drought periods. But they are still drowning in debt casually.

As you leave the tap on, you may believe that the water flows freely. You may also think that saving one liter or not (33.8 fl. oz.), doesn’t matter — it is only a drop of water in the ocean, after all! However, we have been wasting and polluting the water since a fool and his money are easily parted.

And who would believe that a flush contains drinking water for 5 people and that a shower spends 4 days of water to survive?

Whalecome to the modern times:  we must urgently make efforts to protect our treasure… as each drop matters!